This is a book series (duology) that is not that famous (I think) but worth reading.

Ananna of the Tanarau abandons ship when her parents try to marry her off to an allying pirate clan: she wants to captain her own boat, not serve as second-in-command to her handsome yet clueless fiance. But her escape has dire consequences when she learns the scorned clan has sent an assassin after her.
And when the assassin, Naji, finally catches up with her, things get even worse. Ananna inadvertently triggers a nasty curse — with a life-altering result. Now Ananna and Naji are forced to become uneasy allies as they work together to break the curse and return their lives back to normal. Or at least as normal as the lives of a pirate and an assassin can be.

On this series, we are introduced to a young pirate girl called Ananna on her way to an arranged marriage. When she notices that her future husband won’t be a good choice for her, she decides to jump ship ( ( ͡° ͜ʖ ͡°) ) and run away riding a camel. But of course, things cannot be that easy, and her former fiancée’s family hire an assassin to kill her. In this world, assassins are guns-for-hire (or wizards/warriors-for-hire) that never fail, at least until now. In the middle of this mess, Ananna escapes alive and bond to her assassin by a curse. And worse: both are being followed by magical beings that live in another world.

I ain’t never been one to trust beautiful people, and Tarrin of the Hariri was the most beautiful man I ever saw. You know how in the temples they got those paintings of all the gods and goddesses hanging on the wall above the row of prayer-candles? And you’re supposed to meditate on them so as the gods can hear your request better? Tarrin of the Hariri looked just like one of those paintings.

This is a world filled with pirates, wizards, assassins and more, but everything here makes sense, and not even for a moment does it feel like a bunch of fantasy stereotypes that were just thrown together randomly in a story. For me, the author united many different types of characters and myths (some really surprising) in a fantastic way. 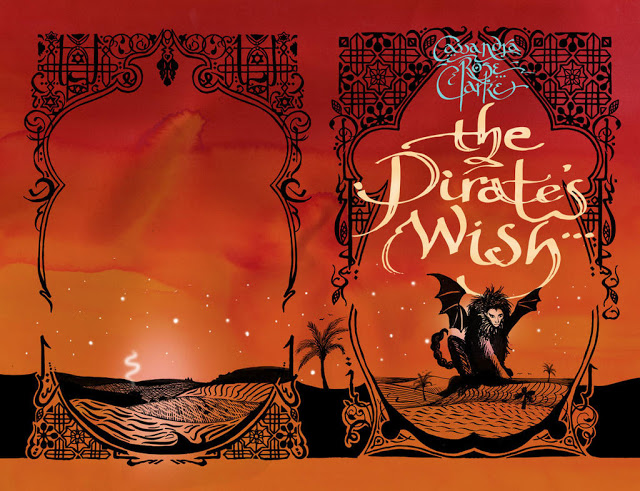 The book also has a fair share of humor and romance, but in a way that it doesn’t overlaps the adventure and magic. It’s a pleasure to sit down and follow them as they travel through the desert, sail the high seas, live in a remote island and visit some places that’ll amaze the reader.

She moved like water, graceful and soft and lovely. Every part of me wanted to stick out my foot and trip her, just to see her stumble.

As you can imagine, I recommend this book for anyone who wants an interesting fantasy romance that doesn’t delve too much on the ship ( ( ͡° ͜ʖ ͡°) ) or force the romance. Instead, it gives them time to know each other and grown their emotions that at some point, turn into love.

You can buy the books here: