This weekend I’ve finished the last book in The Dragon Lords trilogy, by Jon Hollins. I think the best way to introduce it: The Hobbit meets Guardians of The Galaxy. 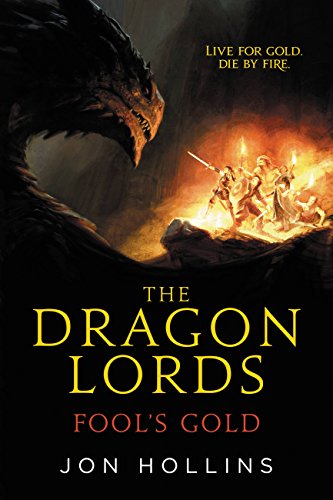 It’s set on a medieval fantasy world, where dragons rule over everyone and the gods don’t do anything and just collect everyone’s coins as taxes, and a group of people decide to rob the dragons. It’s a very simple premise for the beginning of the story, but I can assure you that it IS entertaining, engaging, and very surprising.

It’s not so often that I see a medieval fantasy book with that good humour, but that also delivers an excellent plot, with smart machinations and schemes going on, and that kept getting me surprised and amazed on the twists. Also, it’s not always that books get more and more interesting as you advance in the trilogy - which is something that makes me wary of trilogies.

As we advance on the books, the chapter names also start getting better and better. Let’s check some out of curiosity:

Some quotes and highlights:

The ambassador was from Vinland, after all, an entire nation dedicated to the worship of Barph—god of drunkenness, excess, and revelry. Being sober was a great religious offense in their eyes.

Balur changed tactics. He didn’t want to be bleeding from too many wounds. Two was not too many, but it was the start of a bad trend.

Now there was no one to say, “No,” and it was glorious.

Firkin had never been one to plan out what to say. It was hard to prepare a speech when you couldn’t remember you were meant to give one.

Finished a book trilogy!! It has been some time since I finished a series https://t.co/t5nhT9eUox