A book that teaches us a lot about ourselves, our society, and makes us think about were we are headed!

After finishing Wool by Hugh Howey, I just had to start the next volume. And what a thrill!

The second volume is a prequel to Wool, and tell us how that world came to be. Like Wool, it tells the story through different characters and now, also different times. During the first part of the book, we are shifting between 2 characters: one is before people went to the silos, and is involved in how they got built; the other is working their first shift on Silo #1. Later, we also get to see what happened to silo #17 and how Solo ended up alone there.

I loved the story and how Howey told it to us. I think he also did a great job on writing something that is unfortunately, so believable, that you can't help but read and think "This is terrible, but yeah, that's how it would go". Not very uplifting maybe, but a great read anyway.

As many times with science-fiction, this is a book that teaches us a lot about ourselves, our society, and makes us think about were we are headed. 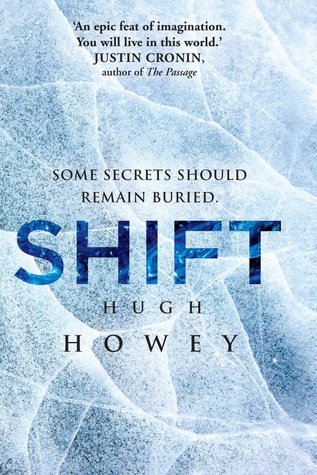 Read 4,726 reviews from the world’s largest community for readers. In 2007, the Center for Automation in Nanobiotech (CAN) outlined the hardware and softwa…

When there’s only God to blame, we forgive him. When it’s our fellow man, we destroy him.

There was no planning for insanity. With enough revolutions and elections, enough transfers of power, eventually a madman would take the reins.

He saw what the Senator meant, how truth and lies seemed black and white, but mixed together, they made everything gray and confusing.

What if they were all playing the same part? What if each and every one of them was concealing the same doubts, none of them talking because they all felt so completely alone?

Great follow up to Wool, a prequel that tell us about how that world came to be!